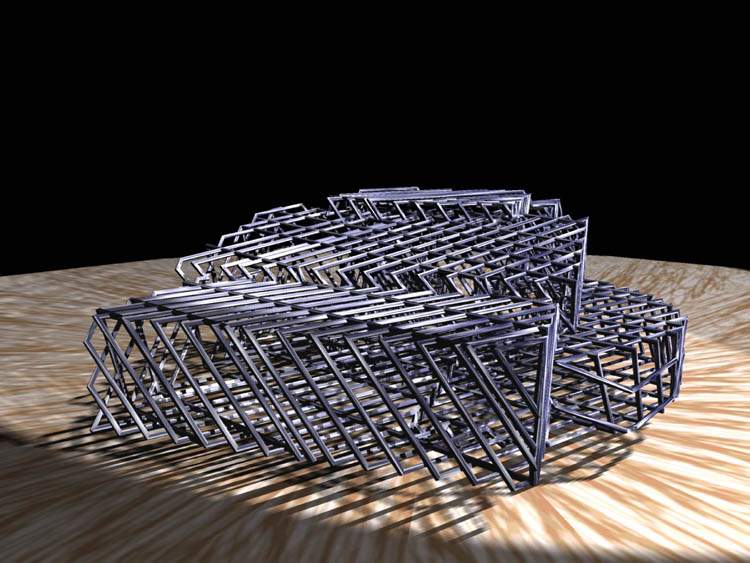 Hi
You are quite right that one could think this shuld be a simple question, it is not.
On one hand you can draw whatever, --- but what work best is not the fancy entities but the fact that when you place a window or a door, then the program remember this window and that door. The fancy dome are just there in the drawing ,but unless you can buy stock Domes this feature don't work as smooth as ready made things.
Bad that the idear that this must be the problem for the engineer allway's was the basic idears in most CAD programs ,but this shaped most programs and deal with the role of profesionals.
This is why I say that the question are not that simple as you shuld think. As if you want somthing different , ---- somthing where you take the _full_ step using a CAD program for architecture projecting, the engineer have to "translate" the Dome as the way the architect deal with it, is very different than how the actural thing will be made. For the architect it's just a nice easy feature , the programmer who thought that architect applications are in terms of fancy mesh entities just somthing that need to show on screen , even next day he proberly have to fight the tight demands of intergrating a spreetsheet to track down any block put into the drawing, ----- then forget about the fancy lineworks ,aslong as the architect can put it on the screen then it's allright if this visionary stuff, are just supported halveway's.
Now a door or a window are supportet fully ; size, cost, delivery anything, -------- but a Dome or a wall is just lines.
Maby architecture didn't go wrong, but programmers do ,when supporting the Lego mind and forgetting that computers shuld acturly bring somthing _new_. As what's "new" about just doing things faster, maby it's "new" that things are documented better but this don't bring Visions.
In this sense the pen are much better, as if entities are only programmed to be fancy lookalikes that bring even more trouble while they still need to be "translated" outside the program to even be build, then isn't this a prove programmers are lazy ; maby it rather are a prove that programmers are without visions .
Maby you think "then what" , but things show and they show heavy ;
today you se those winning competisions from the "style" and pastel colors of cirtain programs ,that is better than others within cirtain glass surfaces and bluish wall coverings . You se "innovative" creations, that is simply a new feature in a CAD program ; the Opera building projectet here in copenhagen was rather a commersial for top trendiest CAD program ,and the facade was soon replaced with a new trend -------- but two weeks after this was anounced, I by chance seen the same expression where just a few compoments changed place ,as a commersial for a new CAD program.
Guess this program was either to expensive or to difficult ,and then the Opera couldn't be made with soft glass and light blue arrayes with fine lines, so the architects compleatly changed style.
---- Do you still follow , as what I hope to describe, are how lazy programmers rule the world.
You can se what program that drawn what project just from the colors avaible and the style. But if architects went wrong somwhere ,I think it is partly their own foult by focusing on the pen and judging any CAD compared with that. These are two different things and it is wrong to be satisfied as long as windows and doors are perfectly counted when free-form need not just a helping hand but a crowd of helping hands ; ------ shuldn't the computer maneage all this, and why is these features left halve done in most programs.
Now to prove that lazy designers _with_ visions and programing abilities do exist, check out the 3D-H building technike ,this can easyli be combined with the useal Legoworks and will bring cosy inviroments combined, but please se this as a "prove" that it is possible to add new visions , ------ now there are no exchouse for the engineers to produce the assemblies, as where 15 years ago a Dome was a zero thickness simple mesh entity, architects can today focus on somthing else than the surface and produce what form the dome ; the floors walls and interiors , then the Dome will come as a result of that.
A pen still only draw 2D on paper, this is acturly not that different than what's on a screen , architects must learn to think 3D as before they do, Lego mind will still rule.
With the kind of tool I want to put in place ,you point to the graphic and say "this is what is going to be produced, all sections are in the section CAD drawing, go find a blacksmith" ;))